Changing Lives with a Soccer Ball 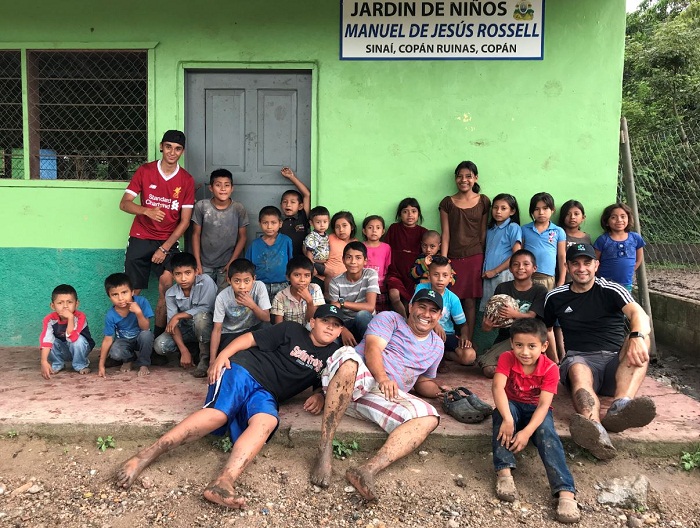 A soccer ball can change a life. That’s what founder of Futbol For Kids, John Monreal, discovered on a trip to Asia. It was this journey that first sparked his realization into just how many people in the world are less fortunate than he.

As he got older, Monreal decided to backpack parts of Europe and Asia with a friend. Their trip took them to places such as Moscow, Beijing and Hong Kong. Monreal’s experience in Asia left him with the impression that while living in England, he had taken for granted the fact that he could watch and play soccer so often. Whenever possible, he kicked the ball around with some of the poverty-stricken children. He realized that when these kids were playing soccer nothing else in the world mattered. They had forgotten the fact that they may not eat dinner that night or that they did not have a big comfy bed to sleep in. Their minds were totally encapsulated by this ball at their feet.

Fast forward ten years and Monreal is living in the United States. One night on TV, he watched a documentary about a man from England traveling to Africa with shipments of soccer balls to donate to kids. Having experienced the joy a child encounters with a soccer ball, a light bulb went on in his head. This was it; this was what he was going to do.

His first destination was Mexico where he donated soccer balls to children at a kindergarten. It was such a great success that when he returned to the states, Monreal filed ‘Futbol For Kids’ with the New York Department of State.

Providing soccer balls to those in need isn’t the only mission. A lot of these families struggle to find clean drinking water. Millions of people each year get sick or die from dirty water. When the sun sets and night comes that’s it; it’s time to go to sleep because there’s no light inside their homes. Too many families can’t afford kerosene and don’t use firewood as they need what little wood they have for cooking. Futbol For Kids strives to change these things by providing these unfortunate people with water filters and solar powered lights.

Last year, Futbol For Kids became a registered 501c3 New York State charity. Since then, Monreal has been planning events and networking like crazy. Support from other organizations as well as having already sent a shipment of soccer balls and t-shirts to schools and orphanages in Zimbabwe and Tanzania has led to exciting times for the organization.

There’s so much ahead for Monreal’s organization. Two events will take place later this month. On August 20th, Monreal’s company, ENT and Allergy has generously agreed to sponsor Futbol For Kids on a 20-mile walk from Tarrytown, NY to Yankee Stadium. Upon arriving at Yankee Stadium, they’ll be attending NYCFC’s match against the New England Revolution. Twenty individuals have already signed up to take part in the walk.

On August 26/27th, Monreal’s pick-up soccer team will be having a penalty shoot out to benefit the organization.

Numerous trips are being planned for 2018. In the Spring, Football For Kids will travel to Peru with local pro-soccer coaches to provide a week long soccer clinic. The Summer of 2018 will bring a trip to Cuba visiting and delivering soccer balls to local schools and orphanages. Monreal is also planning a trip to Costa Rica in the Fall of 2018. Besides delivering soccer balls, his pick-up team will play a local side.

Another plan in the works is collaborating with local colleges and high schools to run mini penalty shoot-out tournaments year-round. Students can pit themselves against their College/HS friends to determine the best penalty shoot-out taker. At the end of the season, there will be a final where the winner from each school will shoot it out to be the grand champion. The emphasis is on a fun time but to also bring awareness to Futbol For Kids and its mission to help children and their families less fortunate.

Donating will ensure these kids and their families have access to clean drinking water and light. The organization’s message is a powerful one: “With everyone’s help we can make a difference – we can change a kids life with something as simple as a soccer ball. The smile it brings them will change your life.”

Special thanks to Mitchell Rozansky for writing this article on behalf of his blog “An American’s Take” (www.anamericanstakeblog.wordpress.com)